Saskatoon, SK, November 16, 2021 – IsoEnergy Ltd. (“IsoEnergy” or the “Company”) (TSXV: ISO; OTCQX: ISENF) is pleased to announce the remaining scintillometer results from its successful summer drilling at the Hurricane zone. Hurricane is a high-grade uranium project located on the Company’s 100% owned Larocque East property (the “Property”) in the Eastern Athabasca Basin of Saskatchewan. 2021 drilling at Hurricane has now concluded and planning is underway for the follow-up program early in 2022.

Tim Gabruch, President and Chief Executive Officer commented: “We are pleased that our summer drilling program at Larocque East has been safely and successfully completed. Drilling at Hurricane continued to grow the zone of uranium mineralization in line with our objectives and strategy. Given these scintillometer results, combined with the program’s initial results released in September 2021, it has been a successful drilling campaign, and we look forward to the winter program commencing in January 2022 to test further potential. Additionally, we have begun to receive some assay results, which we expect to release shortly. It is anticipated that the balance of the assay results will be received before the end of December.”

Andy Carmichael, Vice President of Exploration commented: “The team has had continued success expanding the western side of the Hurricane zone to the south. As well, the identification of an area in the immediate vicinity of Hurricane (drill hole LE21-101) with potential for continued growth is encouraging and we look forward to commencing our next program.”

Drill hole LE21-101 tested the unconformity in an area where graphitic basement bounded by the J- and L-Faults has seen limited drilling. LE21-101 intersected 4.5m of uranium mineralization (>500 CPS) from 324.5 to 329.0m including 0.5m >5,000 CPS from 327.5 to 328.0m. These results are considered encouraging as the unconformity along this prospective, graphitic structural corridor is untested to the east and the nearest drill hole along strike to the west is 150m away. Figures 2 and 6 show the drill hole in plan and section view, respectively.

Drill holes LE21-89 and LE21-95A were completed on section 4885E in the centre of a 200m along-strike gap in drilling. LE21-89 targeted the I-fault at the unconformity and located the J- and K-faults at depth. LE21-95A targeted the K-fault at the unconformity. Neither drill hole intersected uranium mineralization. Significantly, LE21-95A is interpreted to have undershot the K-fault by 25m indicating the mineralization intersected by LE21-101 remains open to the east. Figure 2 shows the locations of drill holes LE21-89 and LE21-95A in plan view.

The 100% owned Larocque East property consists of 33 mineral claims totaling 16,780ha. Two of the project’s claims distal to the Hurricane zone are subject to a 2% Net Smelter Returns Royalty of which 1% may be bought back for $1 million at IsoEnergy’s discretion.  Larocque East is immediately adjacent to the north end of IsoEnergy’s Geiger property and is 35km northwest of Orano Canada’s McClean Lake uranium mine and mill.

Along with other target areas, the Larocque East Property covers a 15-kilometre-long northeast extension of the Larocque Lake conductor system; a trend of graphitic metasedimentary basement rocks that is associated with significant uranium mineralization at the Hurricane zone, and in several occurrences on Cameco Corp. and Orano Canada Inc.’s neighbouring property to the southwest of Larocque East.  The Hurricane zone was discovered in July 2018 and was followed up with 29 drill holes in 2019 and an additional 48 drill holes in 2020.  Dimensions are currently 375m along-strike, up to 125m wide, and up to 12m thick.  The zone is open for expansion along-strike to the east and to the north and south on some sections.  Mineralization is polymetallic and commonly straddles the sub-Athabasca unconformity 320 m below surface.  The best intersection to date is 38.8% U3O8 over 7.5m in drill hole LE20-76.  Drilling at Cameco Corp.’s Larocque Lake zone on the neighbouring property to the southwest has returned historical intersections of up to 29.9% U3O8 over 7.0m in drill hole Q22-040.  Like the nearby Geiger property, Larocque East is located adjacent to the Wollaston-Mudjatik transition zone - a major crustal suture related to most of the uranium deposits in the eastern Athabasca Basin.  Importantly, the sandstone cover on the Property is thin, ranging between 140m and 450m in previous drilling. 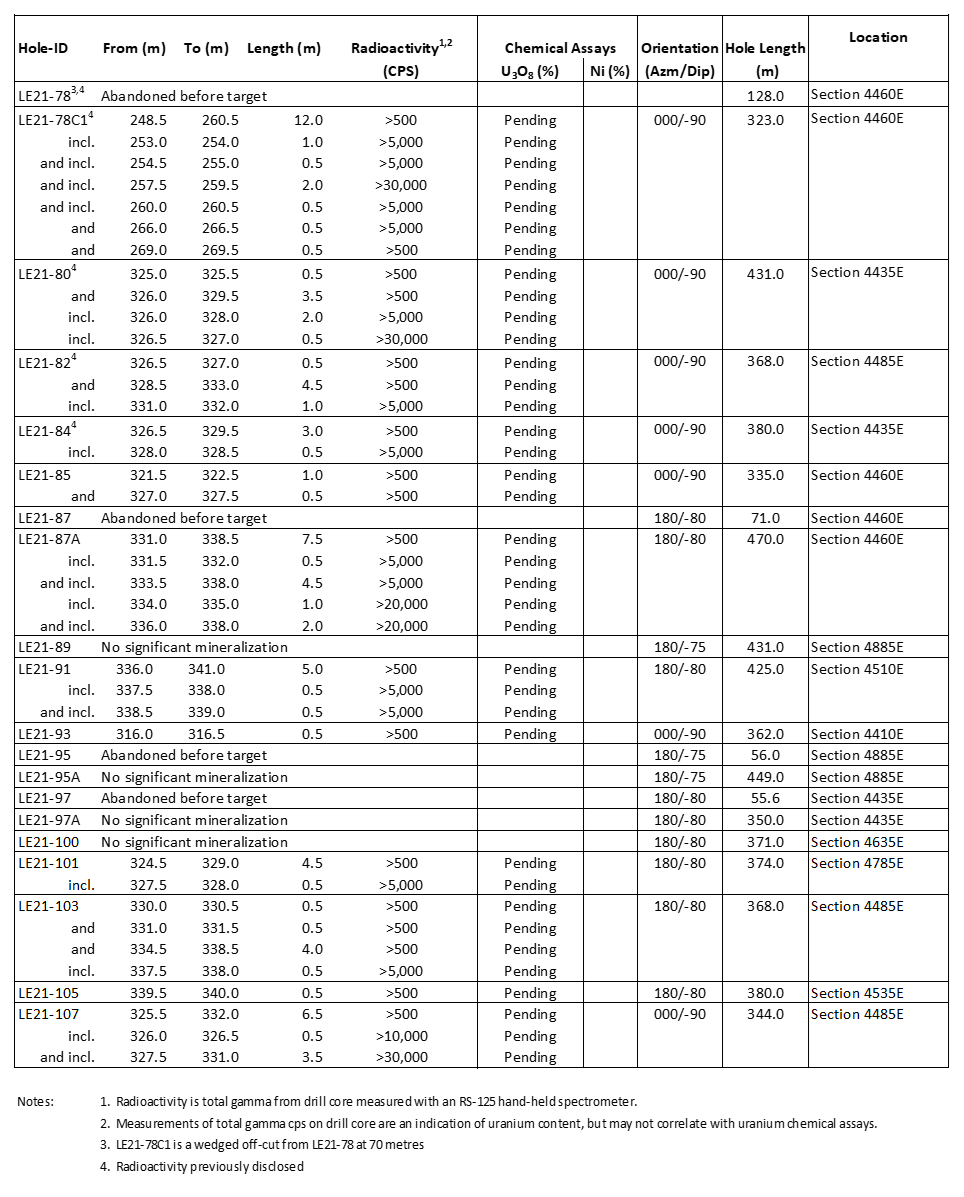 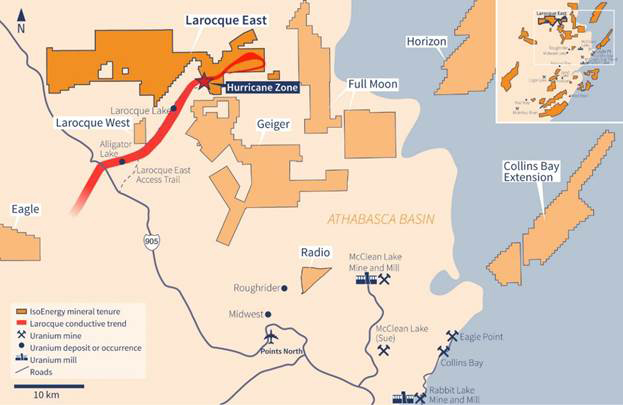 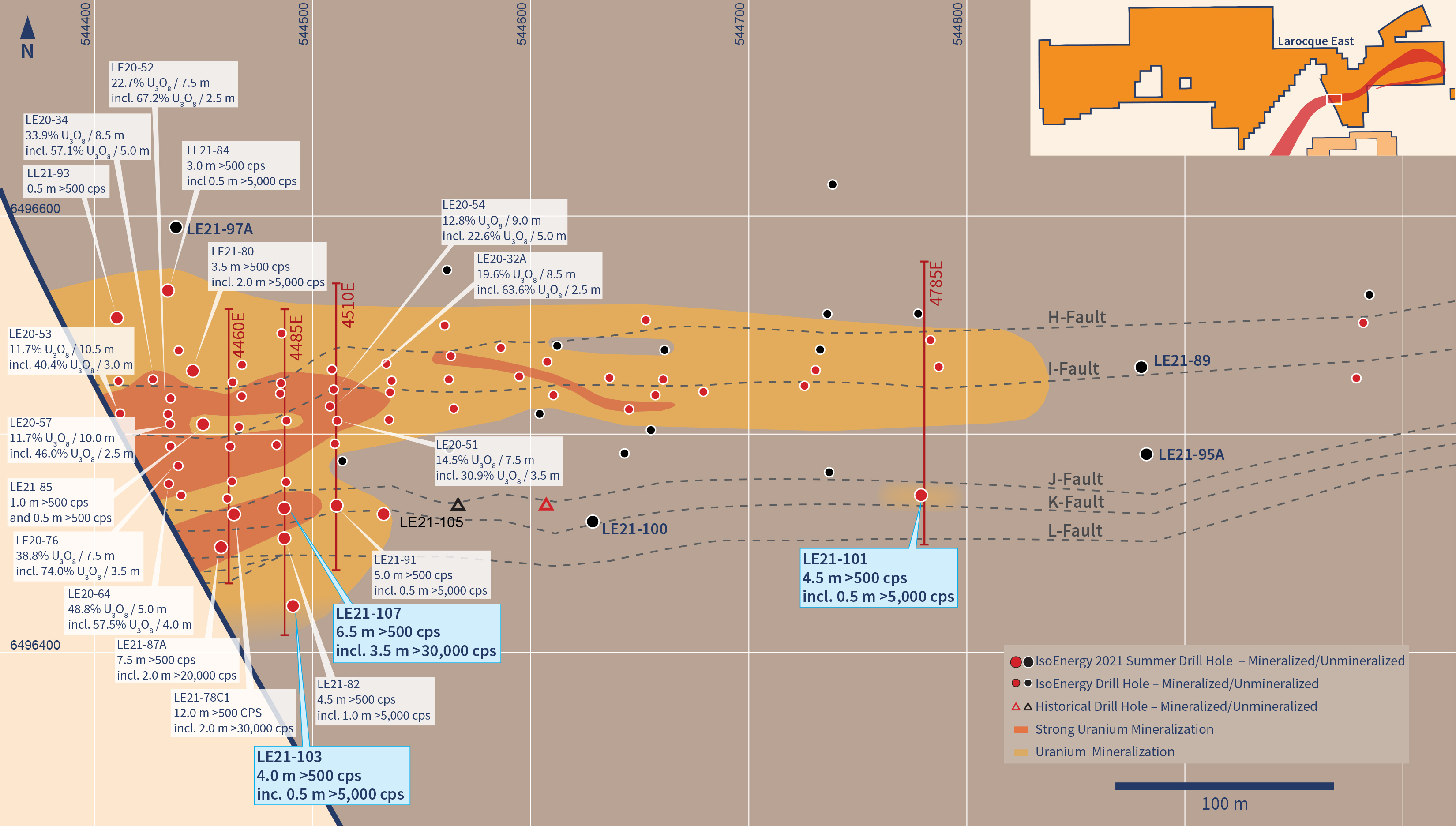 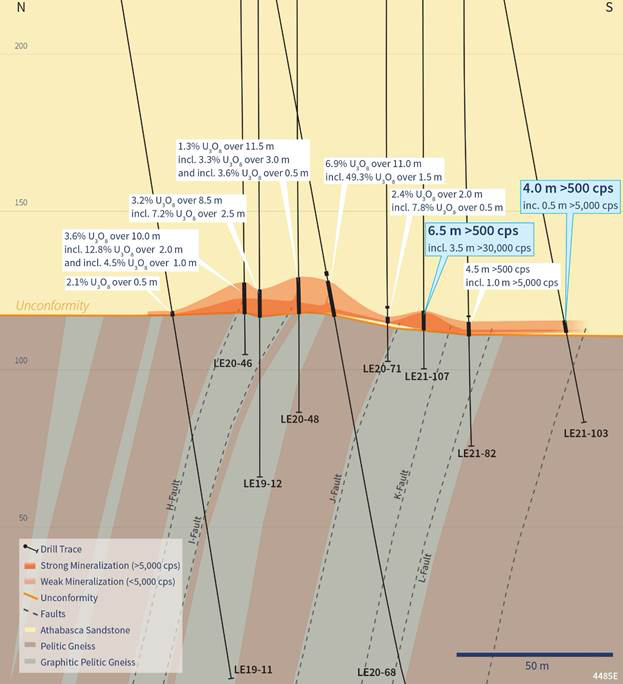 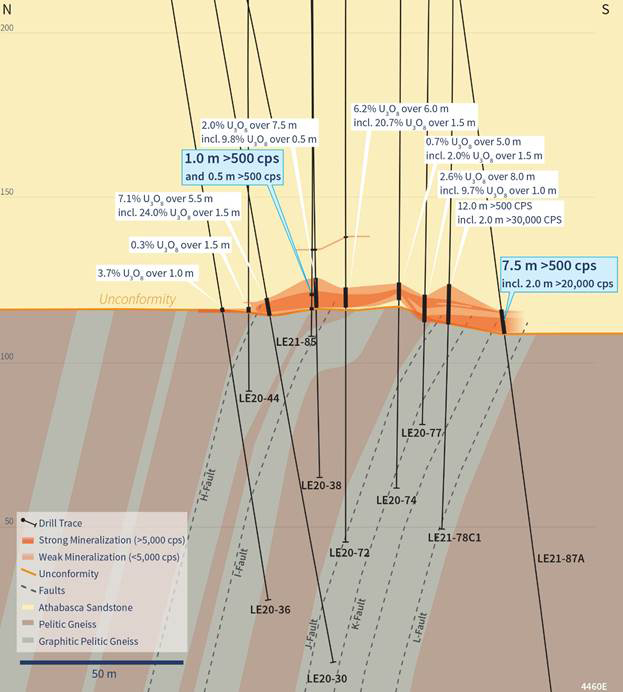 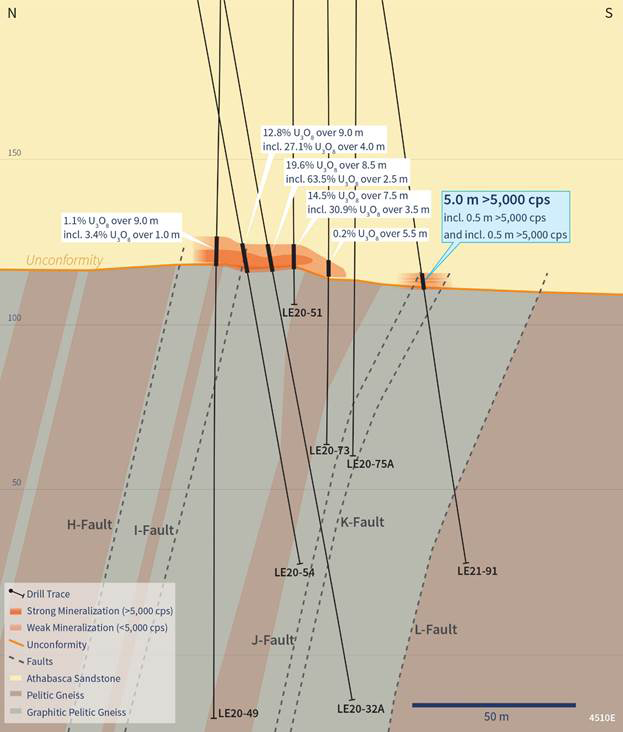 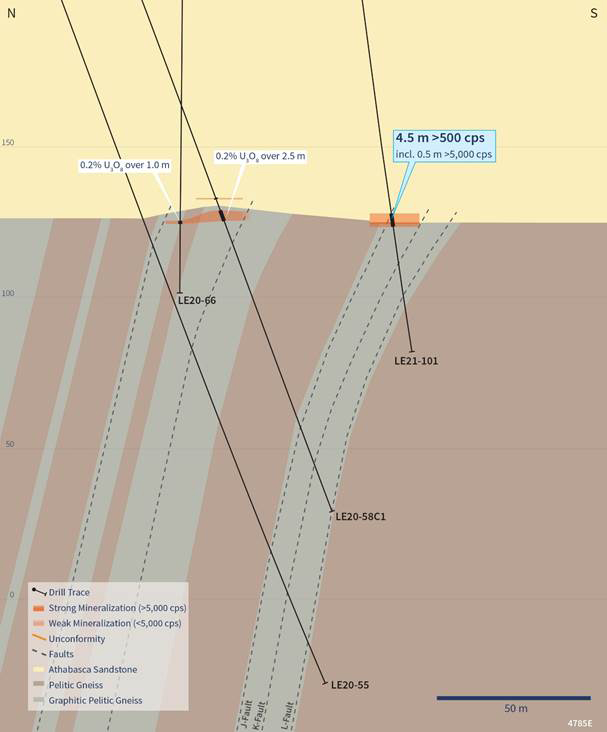 The scientific and technical information contained in this news release was prepared by Andy Carmichael, P.Geo., IsoEnergy’s Vice President, Exploration, who is a “Qualified Person” (as defined in NI 43-101 – Standards of Disclosure for Mineral Projects). Mr. Carmichael has verified the data disclosed. All radioactivity measurements reported herein are total gamma from an RS-125 hand-held spectrometer. As mineralized drill holes at the Hurricane zone are oriented very steeply (-70 to -90 degrees) into a zone of mineralization that is interpreted to be horizontal, the true thickness of the intersections is expected to be greater than or equal to 90% of the core lengths.  This news release refers to properties other than those in which the Company has an interest. Mineralization on those other properties is not necessarily indicative of mineralization on the Company’s properties. All chemical analyses are completed for the Company by SRC Geoanalytical Laboratories in Saskatoon, SK. For additional information regarding the Company’s Larocque East Project, including its quality assurance and quality control procedures, please see the Technical Report dated effective May 15, 2019, on the Company’s profile at www.sedar.com.

IsoEnergy is a well-funded uranium exploration and development company with a portfolio of prospective projects in the eastern Athabasca Basin in Saskatchewan, Canada. The Company recently discovered the high-grade Hurricane Zone of uranium mineralization on its 100% owned Larocque East property in the Eastern Athabasca Basin. IsoEnergy is led by a Board and Management team with a track record of success in uranium exploration, development, and operations. The Company was founded and is supported by the team at its major shareholder, NexGen Energy Ltd.