Saskatoon, SK, January 19, 2022 – IsoEnergy Ltd. (“IsoEnergy” or the “Company”) (TSXV: ISO; OTCQX: ISENF) is pleased to announce that exploration plans have been finalized for the winter 2022 season and that work has commenced. The Company will conduct exploration work on four projects including its flagship 100%-owned Larocque East Project, which is home to the Hurricane zone.

Tim Gabruch, President and Chief Executive Officer commented: “Following the successful summer 2021 drill program, we have commenced drilling at the highly prospective Larocque East property. IsoEnergy heads into 2022 well financed to test expansion of the Hurricane zone, explore the prospective Larocque Lake conductive trend, and undertake detailed analysis on our broader portfolio of projects in preparation for drilling in the near future.

Andy Carmichael, Vice President of Exploration commented: “We are excited for the winter exploration season in the Basin across our highly prospective portfolio of uranium projects. The focus of our drilling is at Larocque East, which will include testing the Hurricane zone expansion target area around the mineralization intersected by LE21-101 during our recent summer program. We will also conduct detailed geophysical surveys over high priority, underexplored target areas at Geiger, Ranger, and Hawk to advance those projects to a drill-ready state.”

Diamond drilling totalling 11,900m is planned at Larocque East during the winter 2022 season. 2,400m are planned at Hurricane to follow-up mineralization intersected by drill hole LE21-101 (4.5m >500 CPS including 0.5m >5,000 CPS). As mineralization intersected by LE21-101 is open on strike to the east and for 150m to the west, follow-up is planned as a series of systematic step outs to evaluate the potential for material expansion. Hurricane drilling target areas are presented in Figure 2.

Fixed Loop Transient Electromagnetic (FLTEM) surveying got underway at the Geiger project in mid-December and is ongoing. A total of 10 FLTEM data profiles are planned in the Q23 and Q48 areas to upgrade historical airborne electromagnetic (EM) conductors in advance of drill testing in 2022 through 2023. Figure 4 shows the planned survey areas.

The Q23 survey area covers a zone of low magnetic susceptibility hosting multiple northeast-trending historical EM conductors with a vertical depth to the unconformity of approximately 275m. The 2.5km-long survey area has been tested by only two historical drill holes, Q23-004 and Q23-011. Q23-004 intersected favourable alteration, structure, and anomalous uranium content in the sandstone but was lost prior to reaching the unconformity. Four hundred metres to the southwest Q23-011 intersected zones of anomalous uranium content in the sandstone and a narrow zone of anomalous radioactivity 10m below the unconformity attributed to fault-hosted uranium mineralization. Four FLTEM profiles are planned for the Q23 area.

The Q48 area is a zone of low magnetic susceptibility hosting multiple north-northeast- to north-trending electromagnetic conductors lying along 8km along strike from the Murphy Lake uranium occurrence (0.25% U3O8 over 6.0m in drill hole MP-15-03). The vertical distance to the unconformity is approximately 250m. The 4.0km long survey area has been tested by a single drill hole, Q48-003, which intersected a major zone of alteration and structure in the sandstone with coincident anomalous uranium geochemistry. Six FLTEM profiles are planned in the Q48 area.

Ten lines of FLTEM ground geophysical surveying are planned to advance the underexplored Ranger project to a drill-ready state. Historical work within the western Ranger claim group has identified numerous sub-parallel, east-northeast- to northeast-trending conductors with a combined strike length of approximately 20km. The approximately 4.5km x 6.0km survey area has been tested by only five historical drill holes, all of which are in the southeastern portion and indicate the depth to the unconformity is between 230m and 300m. Figure 5 shows the planned survey area.

Hawk is an early-stage project which covers 10km of a prospective, low magnetic susceptibility corridor hosting EM conductors interpreted to reflect graphitic metasediments. The single existing drill hole on the project failed to intersect the targeted conductor, indicating that the entire corridor remains untested within the project. The vertical depth to the unconformity is expected to be between 600m and 750m. Winter 2022 geophysical work will consist of six lines of widely spaced FLTEM surveying to generate targets for first-pass reconnaissance drilling. Figure 6 shows the planned survey areas. 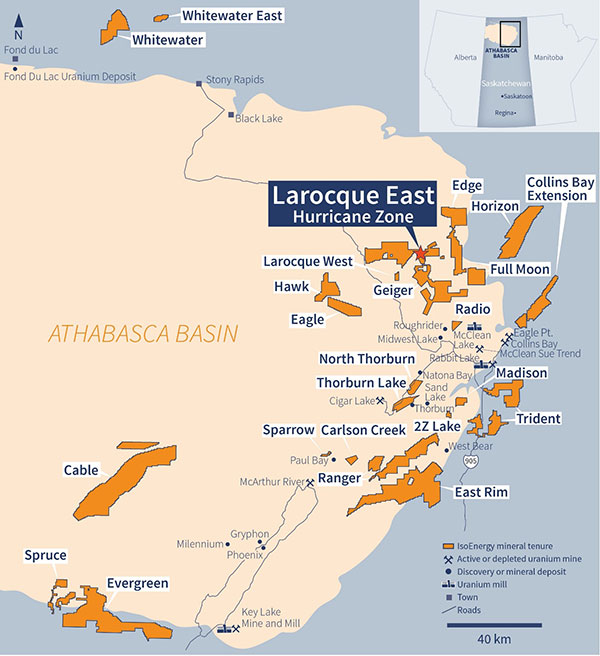 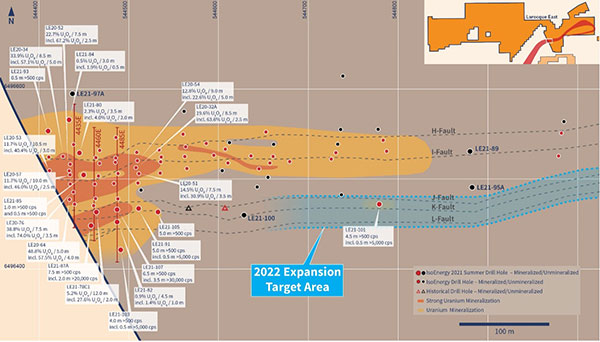 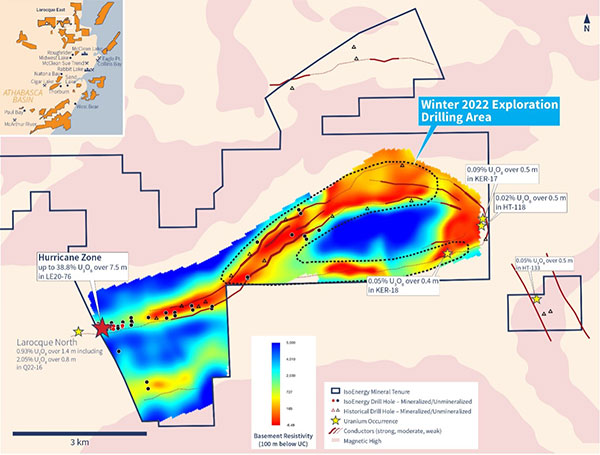 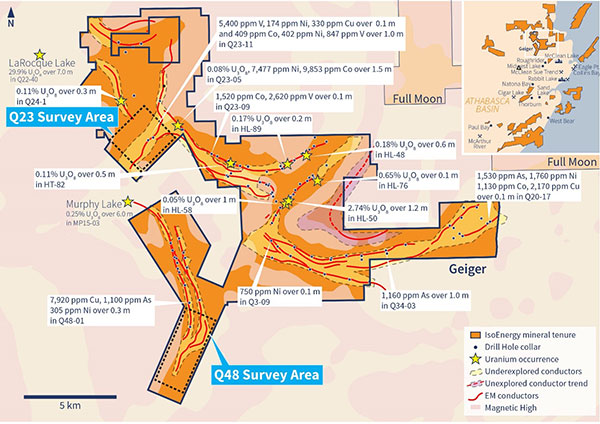 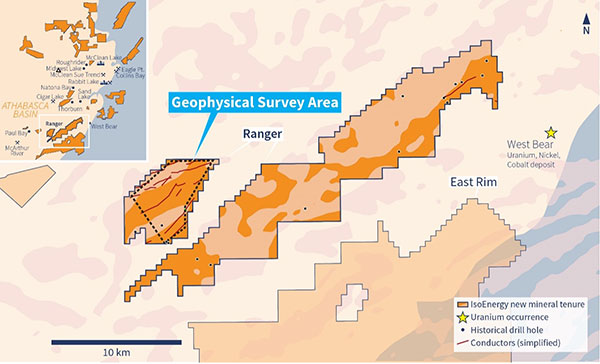 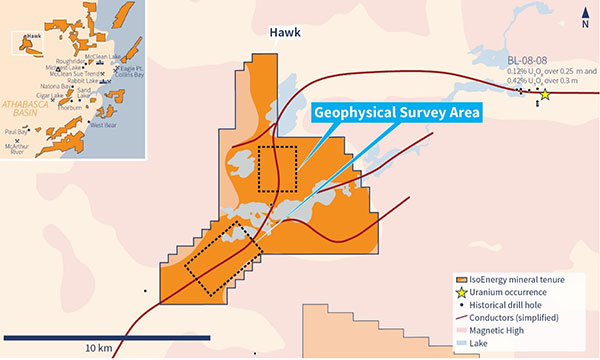 The scientific and technical information contained in this news release was prepared by Andy Carmichael, P.Geo., IsoEnergy’s Vice President, Exploration, who is a “Qualified Person” (as defined in NI 43-101 – Standards of Disclosure for Mineral Projects). Mr. Carmichael has verified the data disclosed. All radioactivity measurements reported herein are total gamma from an RS-125 hand-held spectrometer. As mineralized drill holes at the Hurricane zone are oriented very steeply (-70 to -90 degrees) into a zone of mineralization that is interpreted to be horizontal, the true thickness of the intersections is expected to be greater than or equal to 90% of the core lengths. This news release refers to properties other than those in which the Company has an interest. Mineralization on those other properties is not necessarily indicative of mineralization on the Company’s properties. All chemical analyses are completed for the Company by SRC Geoanalytical Laboratories in Saskatoon, SK. For additional information regarding the Company’s Larocque East Project, including its quality assurance and quality control procedures, please see the Technical Report dated effective May 15, 2019, on the Company’s profile at www.sedar.com.

IsoEnergy is a well-funded uranium exploration and development company with a portfolio of prospective projects in the eastern Athabasca Basin in Saskatchewan, Canada. The Company recently discovered the high-grade Hurricane Zone of uranium mineralization on its 100% owned Larocque East property in the Eastern Athabasca Basin. IsoEnergy is led by a Board and Management team with a track record of success in uranium exploration, development, and operations. The Company was founded and is supported by the team at its major shareholder, NexGen Energy Ltd.