Vancouver, BC, January 5, 2017 – IsoEnergy Ltd. (“IsoEnergy” or the “Company”) (TSXV:ISO) is pleased to report on the first stage of a two-stage drilling program at each of its Thorburn Lake and Radio uranium projects in the eastern Athabasca Basin of Saskatchewan.  Results of Phase 1 drilling at Thorburn Lake include the intersection of uranium mineralization in drill hole RD16-19, and elevated radioactivity at the unconformity in several other drill holes.  The highlight of Phase 1 drilling at Radio was the discovery of a large zone of basement clay alteration with a tenor and scale that is typically found close to significant uranium mineralization, including the nearby Roughrider uranium deposit.

IsoEnergy is undertaking a two-stage drilling program, where land accessible targets were drilled during the period September to November 2016, whilst drilling of targets accessible upon ice formation will be undertaken in Q1 2017.  Thorburn Lake, located 7 kilometres east of the Cigar Lake uranium mine, is 100% owned.  IsoEnergy has an exclusive right to earn a 70% interest in the Radio property, which is located 2 kilometres east of the Roughrider uranium deposit.

Six drill holes (2,587 metres) were completed at Thorburn Lake to follow up on two previous drilling campaigns in 2008 and 2011 that identified an area of anomalous radioactivity and geochemistry at the sub-Athabasca unconformity.  Previous results include 0.43% U3O8 over 0.6 metres in drill hole TBN11-05A.  Figure 1 shows the drill hole locations at Thorburn Lake.  Depth to the unconformity at Thorburn Lake ranges from 290 to 350 metres.

IsoEnergy is planning a 10 hole (4,300 metre) winter drilling program to follow up on the 2016 results.  Drilling will be carried out in conjunction with a program at the Radio property during the January to March 2017 winter drilling season.  The primary target will be the northeast strike extension of the mineralization, alteration and structural zone described above.  Secondary targets include several resistivity low anomalies observed in an 85 line-kilometer DC-resistivity geophysical survey completed in October 2016. 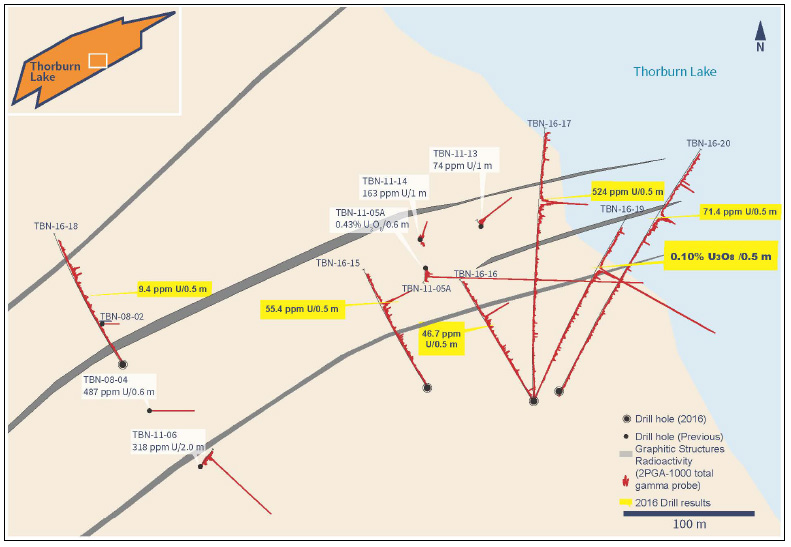 A total of 13 drill holes (4,946 m) were completed on the Radio property.  Three main target areas were evaluated as shown in Figure 2 below: (1) the central Roughrider Corridor of metasediments, (2) magnetic low anomalies along the Northern Corridor of the property, and (3) weak but extensive clay alteration in 2013 drill hole RD13-08 along the Southern Corridor of Radio.  This last target area is the location of the basement clay alteration discovery.  Depth to the sub-Athabasca unconformity at Radio ranges from 170 to 190 metres.

Five drill holes were completed in the vicinity of drill hole RD13-08 during the campaign.  The initial target was the up-dip projection of weak but persistent clay alteration in RD13-08 toward the sub-Athabasca unconformity on cross section 400E (Figure 3).  Drill hole RD16-11 was the first in the current program to target the area and intersected 105 metres of moderate to strong structurally controlled grey and white clay alteration in the basement 280 metres up-dip of RD13-08, and 200 metres down-dip of the unconformity.  The zone is associated with several parallel (stacked) graphitic fault zones that are conformable with the geology and foliation.

Drill hole RD16-17 was subsequently collared 75 metres up-dip of RD16-11 (also on cross section 400E) and intersected 130 metres of weak to strong clay alteration in the lower sandstone and upper basement, demonstrating that the zone extends for a minimum of 75 metres along the dip direction.  A fourth drill hole, RD16-19 was completed 75 metres up-dip of RD16-17.  RD16-19 intersected only 25 metres of weak alteration in the sandstone and basement, suggesting that it over-shot the strong portion of the alteration zone.
Drill hole RD16-21A evaluated the along-strike projection of the zone 200 metres to the northeast on cross section 600E, and it intersected the strongest alteration to date, consisting of 120 metres of moderate to strong clay alteration in the basement, beginning immediately below the sub-Athabasca unconformity.  As with section 400E, the zone is associated with parallel (stacked) graphitic fault zones that are conformable with the geology and foliation. 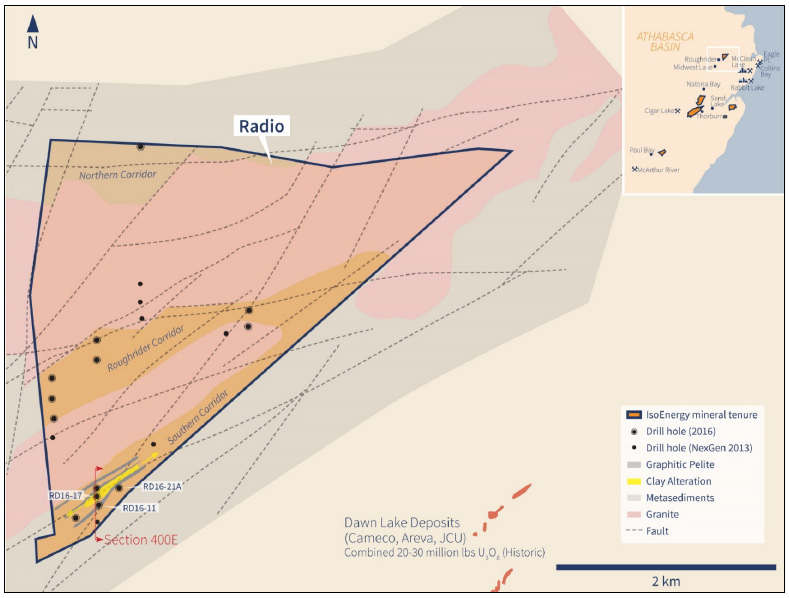 IsoEnergy is planning a 10 hole (4,100 metre) winter drilling program to follow up on the 2016 results.  Drilling will be carried out in conjunction with a program at the Thorburn Lake property during the January to March 2017 winter drilling season.  The primary target will be uranium mineralization associated with the large zone of basement clay alteration described above. 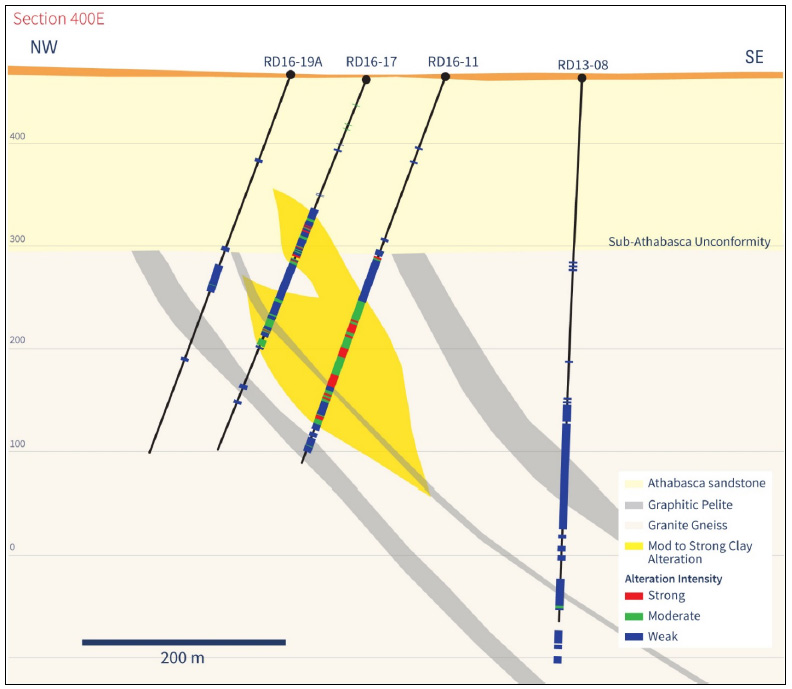 Steve Blower, Vice-President Exploration, commented: “Exploration success in the Athabasca basin usually begins with the intersection of significant alteration zones, which have a much larger footprint than the bodies of uranium mineralization they encompass.  The volume and intensity of clay alteration in the southern target area at Radio is impressive and is similar to alteration haloes around the recently discovered Roughrider, Arrow and Gryphon basement uranium deposits.  I’m also encouraged by the size of the area of elevated radioactivity at Thorburn Lake, especially considering that alteration and structure are improving toward the northeast.  Both sites warrant additional aggressive drilling campaigns during the January to March 2017 winter drilling season.”

The Company has granted the Chief Executive Officer, an aggregate of 250,000 stock options at an exercise price of $1.00.  The options are exercisable for a period of five years and vest annually in three equal instalments commencing on the date of grant. The options will be governed by the Company’s incentive stock option plan.

The disclosure of a scientific or technical nature contained in this news release was prepared by Steve Blower, P.Geo., IsoEnergy’s Vice President, Exploration, who is a Qualified Person (as defined in National Instrument 43-101 – Standards of Disclosure for Mineral Projects). Mr. Blower has verified the data disclosed. For additional information regarding the Company’s Radio project and Thorburn Lake project, including its quality assurance and quality control procedures, please see the technical report dated effective August 19, 2016 and September 26, 2016, respectively, in each case, on the Company’s profile at www.sedar.com.

IsoEnergy Ltd. is a well-funded uranium exploration and development company with a portfolio of prospective projects in the eastern Athabasca Basin in Saskatchewan, Canada. IsoEnergy is led by a Board and Management team with a track record of success in uranium exploration, development and operations. The Company was founded and is supported by the team at its major shareholder NexGen Energy Ltd.

The TSXV has neither approved nor disapproved the contents of this press release. Neither the TSXV nor its Regulation Services Provider (as that term is defined in the policies of the TSXV) accepts responsibility for the adequacy or accuracy of this release.

This news release contains "forward-looking information" within the meaning of applicable Canadian securities legislation.  “Forward-looking information” includes, but is not limited to, statements with respect to the activities, events or developments that the Company expects or anticipates will or may occur in the future, including, without limitation, planned exploration activities. Generally, but not always, forward-looking information and statements can be identified by the use of words such as “plans”, “expects”, “is expected”, “budget”, “scheduled”, “estimates”, “forecasts”, “intends”, “anticipates”, or “believes” or the negative connotation thereof or variations of such words and phrases or state that certain actions, events or results “may”, “could”, “would”, “might” or “will be taken”, “occur” or “be achieved” or the negative connotation thereof.

Such forward-looking information and statements are based on numerous assumptions, including among others, that the results of planned exploration activities are as anticipated, the price of uranium, the anticipated cost of planned exploration activities, that general business and economic conditions will not change in a material adverse manner, that financing will be available if and when needed and on reasonable terms, and that third party contractors, equipment and supplies and governmental and other approvals required to conduct the Company’s planned exploration activities will be available on reasonable terms and in a timely manner. Although the assumptions made by the Company in providing forward-looking information or making forward-looking statements are considered reasonable by management at the time, there can be no assurance that such assumptions will prove to be accurate.

Forward-looking information and statements also involve known and unknown risks and uncertainties and other factors, which may cause actual events or results in future periods to differ materially from any projections of future events or results expressed or implied by such forward-looking information or statements, including, among others: negative operating cash flow and dependence on third party financing, uncertainty of additional financing, no known mineral reserves or resources, potential forfeiture of the Radio Option Agreement, the limited operating history of the Company, the influence of a large shareholder,  alternative sources of energy and uranium prices, aboriginal title and consultation issues, reliance on key management and other personnel, actual results of exploration activities being different than anticipated, changes in exploration programs based upon results, availability of third party contractors, availability of equipment and supplies, failure of equipment to operate as anticipated; accidents, effects of weather and other natural phenomena and other risks associated with the mineral exploration industry, environmental risks, changes in laws and regulations, community relations and delays in obtaining governmental or other approvals.