Vancouver, BC, May 29, 2019 – IsoEnergy Ltd. (“IsoEnergy” or the “Company”) (TSXV: ISO; OTCQX: ISENF) is pleased to announce its targeting strategy for the upcoming Summer 2019 Hurricane Extension drilling program on its 100% owned Larocque East property (the “Property”).  The primary objective of the drilling will be to evaluate the potential for expansion of the Hurricane zone east of the current drilling pattern.  Targets have been generated from integrated interpretations of geology, trace element geochemistry, alteration patterns and preliminary results from a 53 line-km program of DC-Resistivity (DC-Res) geophysical surveying that is still underway.  The Hurricane zone is a new discovery of high-grade uranium mineralization located in the prolific eastern Athabasca basin, Saskatchewan.

Based on the Company’s recently completed winter drilling program, the Hurricane zone is a body of shallow (330m below surface), high-grade uranium mineralization located on the west side of the Larocque East property (Figure 1).  Eleven of 12 drill holes in the winter campaign intersected significant uranium mineralization.  Hurricane now measures 150m (long) x 38m (wide) and is up to 8.5m thick.  The zone is open on all five sections drilled to date and along-strike in both directions.  The Company, having raised $5.5 million in December 2018, remains fully funded for a follow-up drilling campaign that is expected to begin in late June.

Steve Blower, Vice President, Exploration commented: “Compilation of our drilling data and integration with results from our geophysical surveying program has given us a clear path forward for our rapidly approaching summer drilling program.  Increasing sandstone alteration to the east combined with robust trace element geochemistry in the easternmost drill hole confirms the highly prospective nature of the eastern strike extension of Hurricane.  Further, our new geophysical survey results support the premise that historical mineralized drill hole KER-07, located 345m to the east, was drilled 100m south of the target horizon.”

Craig Parry, Chief Executive Officer commented: “I’m excited about the potential for expansion of the Hurricane zone along-strike to the east of our current drilling pattern.  With the planned resumption of drilling in late June, upcoming releases of Hurricane drill results should coincide with improving uranium market conditions expected in the near term.”

Five main features, as described below, suggest a strong probability that the Hurricane mineralization extends east of the easternmost drill hole at Hurricane, LE19-13.

Drill hole LE19-13 intersected substantial uranium mineralization (0.6% U3O8 over 2.5m) but was likely drilled south of the optimal location on the trend, based on oriented core measurements and ISO’s interpretation of the basement geology.

Clays in the sandstone above the Hurricane zone are dominantly illitic, a feature commonly associated with large uranium deposits in the Athabasca basin.  Historical mineralized drill hole KER-07, 345m east of the Hurricane zone, also intersected sandstone with strongly illitic clays throughout much of the column.

New geophysical results from the Company’s ongoing DC-Resistivity survey confirm that KER-07 was drilled south of the target basement horizon.  Figure 4 shows preliminary results of the survey over the eastern strike extension area.  Historical drill hole KER-07 was drilled on the southern margin of the relatively wide conductive package, approximately 70m south of the relative position of the Hurricane zone, which is located in the center of the conductive package.

Sixteen drill holes totalling 6,700m are planned for the upcoming summer drilling season at Larocque East.  Based on the features described above, 13 of the 16 drill holes will target the eastern strike extension of the zone in the area marked on Figure 5.  They will be drilled as a series of two to three hole fences spaced 100-200 metres apart and will evaluate a total additional strike length of 900 metres.  The remaining three drill holes will evaluate the potential for thicker and higher-grade zones within the current drilling pattern as marked on Figure 6.  Drilling is expected to resume at Hurricane in late June

Larocque East consists of 6 mineral claims totaling 3,200 hectares and was purchased in May, 2018.  The Property is owned 100% by IsoEnergy and is not encumbered by any royalties or other interests.  Larocque East is immediately adjacent to the north end of IsoEnergy’s Geiger property and is 35 kilometres northwest of Orano Canada’s McClean Lake uranium mine and mill.

The Property covers a 15-kilometre-long northeast extension of the Larocque Lake conductor system; a trend of graphitic metasedimentary basement rocks that is associated with significant uranium mineralization at the Hurricane zone, and in several occurrences on a neighbouring property to the southwest of Larocque East.  The closest of these to Larocque East are the Larocque Lake and Larocque North zones, which are located 6.5 kilometres and 0.4 kilometres, respectively, to the southwest of the western Larocque East property boundary.  Drilling at Cameco Corp.’s Larocque Lake zone has returned historical intersections of up to 29.9% U3O8 over 7.0 metres in drill hole Q22-040.  Drilling at the Larocque North zone has returned intersections of up to 2.05% U3O8 over 0.6 metres in drill hole Q22-16.  Like the nearby Geiger property, Larocque East is located adjacent to the Wollaston-Mudjatik transition zone - a major crustal suture related to most of the major uranium deposits in the eastern Athabasca Basin.  Importantly, the sandstone cover on Larocque East is thin, ranging between 140 metres and 330 metres in previous drilling.

In addition to the Hurricane zone discovery, four historical drill holes have intersected weak uranium mineralization at other locations on the Larocque East property to date. 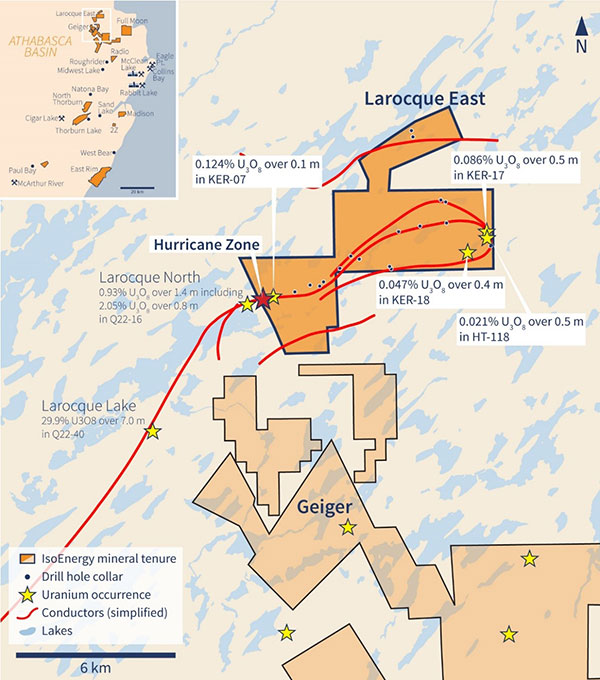 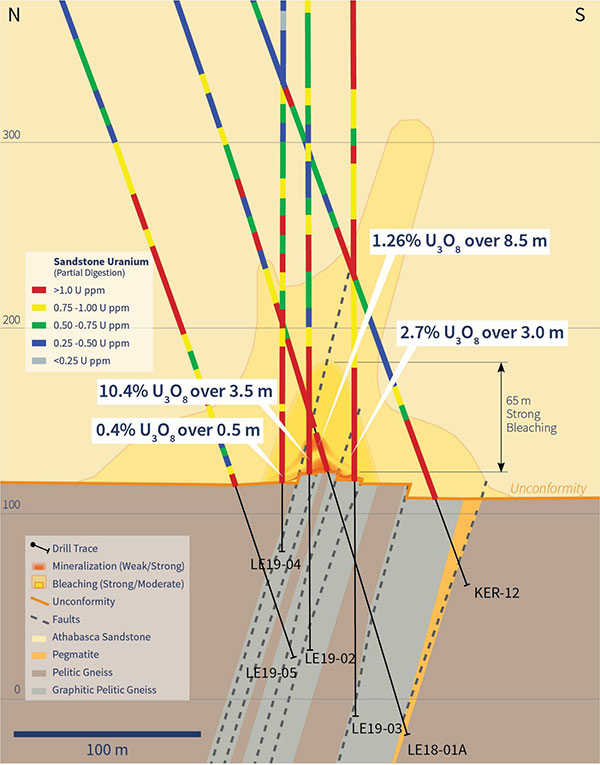 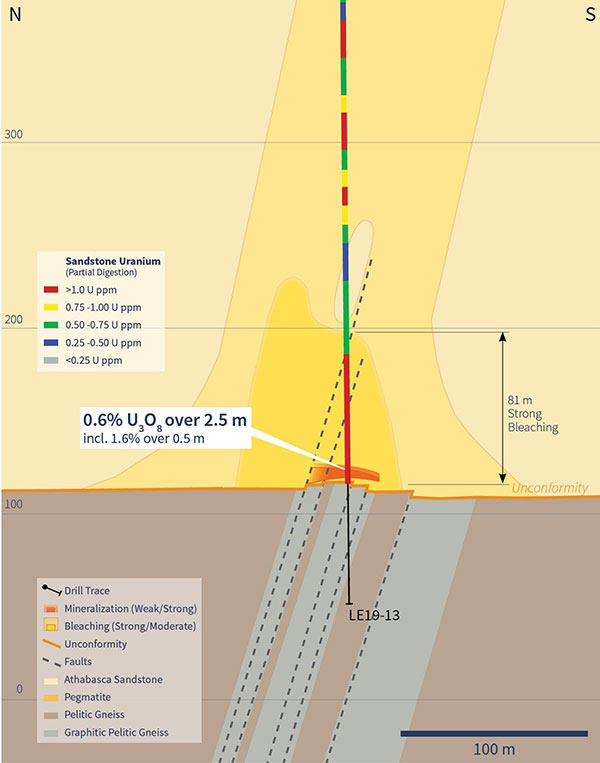 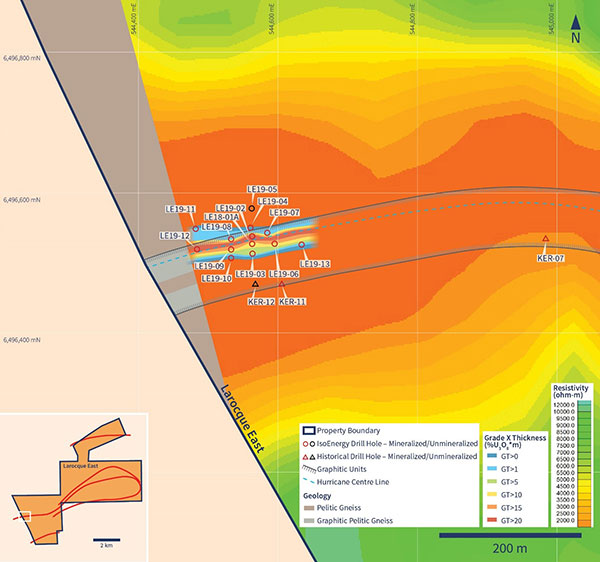 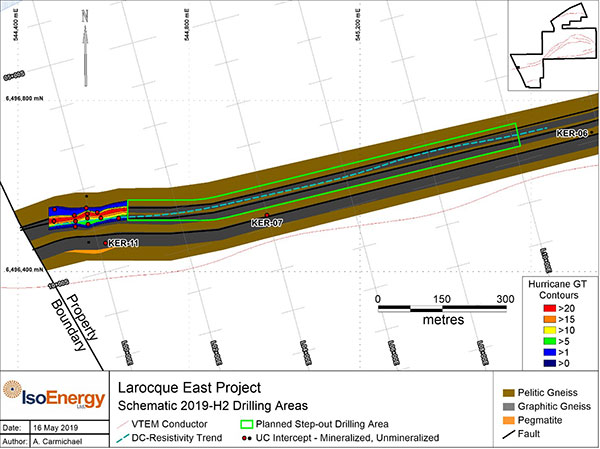 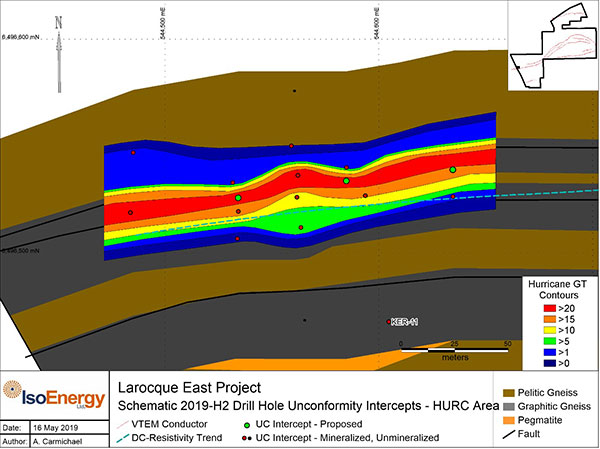 The scientific and technical information contained in this news release was prepared by Andy Carmichael, P.Geo., IsoEnergy’s Senior Geologist, who is a “qualified person” (as defined in National Instrument 43-101 – Standards of Disclosure for Mineral Projects).  Mr. Carmichael has verified the data disclosed.  This news release refers to properties other than those in which the Company has an interest. Mineralization on those other properties is not necessarily indicative of mineralization on the Company’s properties.  An RS-125 hand-held spectrometer was used to verify that the radioactivity is due to uranium.  As the drill holes reported herein are vertical or near-vertical, and the mineralization is interpreted to be horizontal, the true thickness is expected to be within 90% of the cored intervals.

IsoEnergy is a well-funded uranium exploration and development company with a portfolio of prospective projects in the eastern Athabasca Basin in Saskatchewan, Canada and a historic inferred mineral resource estimate at the Mountain Lake uranium deposit in Nunavut.  IsoEnergy is led by a Board and Management team with a track record of success in uranium exploration, development and operations.  The Company was founded and is supported by the team at its major shareholder, NexGen Energy Ltd.