Vancouver, BC, March 18, 2020 – IsoEnergy Ltd. (“IsoEnergy” or the “Company”) (TSXV: ISO; OTCQX: ISENF) is pleased to report additional results from the winter 2020 drilling program at the Hurricane zone.  The Hurricane zone is a new discovery of high-grade uranium mineralization on the Company’s 100% owned Larocque East property (the “Property”) in the Eastern Athabasca Basin of Saskatchewan (Figure 1).

Craig Parry, Chief Executive Officer commented: “I’d like to congratulate our field crews on a very successful drilling program.  The program was delivered safely and efficiently whilst generating many intersections of strong uranium mineralization.”

Steve Blower, Vice President of Exploration commented: “I’m encouraged by the number of thick intersections of very strong uranium mineralization encountered in this drilling program.  The potential for more of these intersections at the Hurricane zone remains very high, as most of the cross-sections are yet to be closed off.”

Drill hole LE20-40 was completed on section with (and 8.5m south of) previously reported drill hole LE20-34 (8.5m @ 33.9% U3O8) to evaluate the extent of high-grade mineralization to the south of that drill hole.  It successfully intersected 4.0m of strong uranium mineralization that averages 20.5% U3O8 from 322.5 to 326.5m, including a sub-interval of very strong mineralization that averages 53.8% U3O8 over 1.5m.  Figure 2 shows the drill holes in plan-view.  Figure 3 shows the drill holes plotted on a cross-section.  Table 1 summarizes the assay and radioactivity results at the Hurricane zone.

Drilled on section with, and 8m south of drill hole LE20-32A, drill hole LE20-51 was designed to evaluate the potential for additional high-grade mineralization south of that drill hole.  LE20-51 successfully intersected a 7.5m thick zone of strong uranium mineralization from 322.5 to 330.0m that includes a 3.0m subinterval of continuous mineralization measuring >30,000CPS (RS-125) (Figures 2 and 6).  The subinterval contains abundant “worm-rock” textured intergrowths of pitchblende and hematite along with common nickel mineralization.  A core photo is provided in Figure 7.

Drilling to the East of the Hurricane Zone

Drill holes LE20-43, 45A, 47 and 50 were completed up to 1.6km east of the Hurricane zone.  Although no uranium mineralization was intersected, several important features were observed in the drill core that will require follow-up drilling in the area.  These include strong graphitic brittle faults in the basement and strong sandstone alteration zones similar to those associated with uranium mineralization at the Hurricane zone.  Geochemical analyses from the fault zones and alteration haloes are pending.

The 100% owned Larocque East property consists of 20 mineral claims totaling 8,371 ha and is not encumbered by any royalties or other interests.  Larocque East is immediately adjacent to the north end of IsoEnergy’s Geiger property and is 35 km northwest of Orano Canada’s McClean Lake uranium mine and mill.

Along with other target areas, the Property covers a 15-kilometre-long northeast extension of the Larocque Lake conductor system; a trend of graphitic metasedimentary basement rocks that is associated with significant uranium mineralization at the Hurricane zone, and in several occurrences on Cameco Corp.’s neighbouring property to the southwest of Larocque East.  The Hurricane zone was discovered in July, 2018 and was followed up with 29 drill holes in 2019.  Dimensions are currently 575m along-strike, 40m wide and up to 11m thick.  The zone is open for expansion along-strike to the east and on most sections.  Mineralization is polymetallic and commonly straddles the sub-Athabasca unconformity 320 m below surface.  The best intersection to date is 33.9% U3O8 over 8.5m in drill hole LE20-34.  Drilling at Cameco Corp.’s Larocque Lake zone on the neighbouring property to the southwest has returned historical intersections of up to 29.9% U3O8 over 7.0m in drill hole Q22-040.  Like the nearby Geiger property, Larocque East is located adjacent to the Wollaston-Mudjatik transition zone - a major crustal suture related to most of the uranium deposits in the eastern Athabasca Basin.  Importantly, the sandstone cover on the Property is thin, ranging between 140m and 330m in previous drilling.  In addition to the Hurricane zone discovery, four historical drill holes have intersected weak uranium mineralization at other locations on the Property to date. 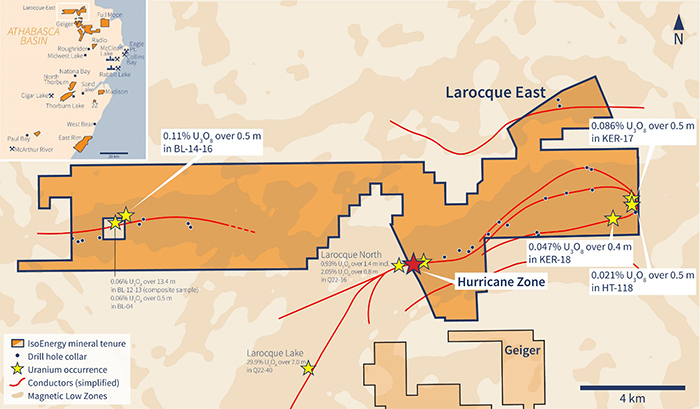 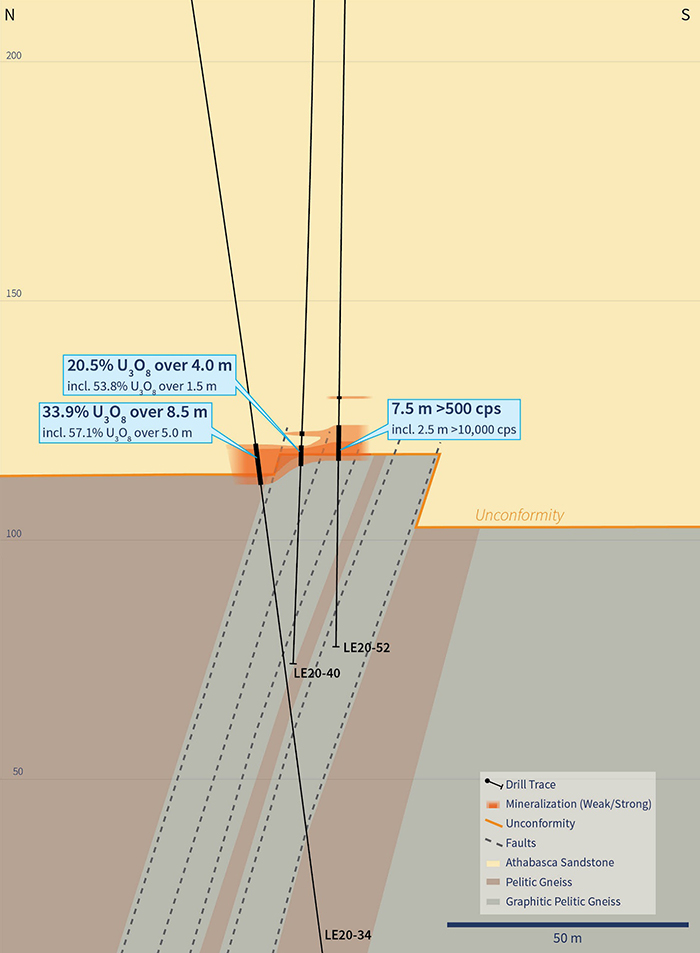 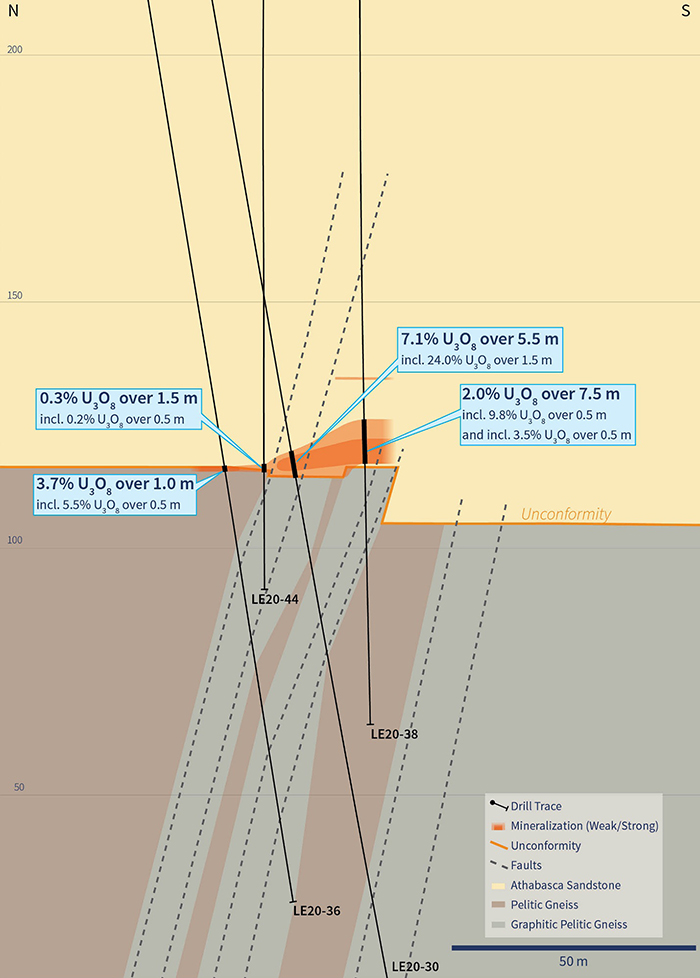 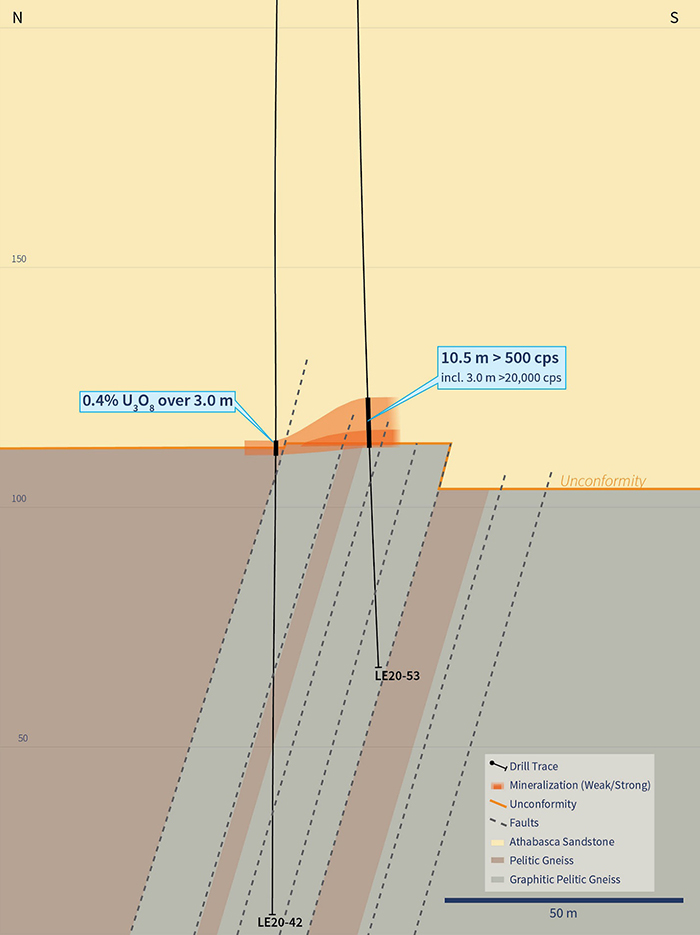 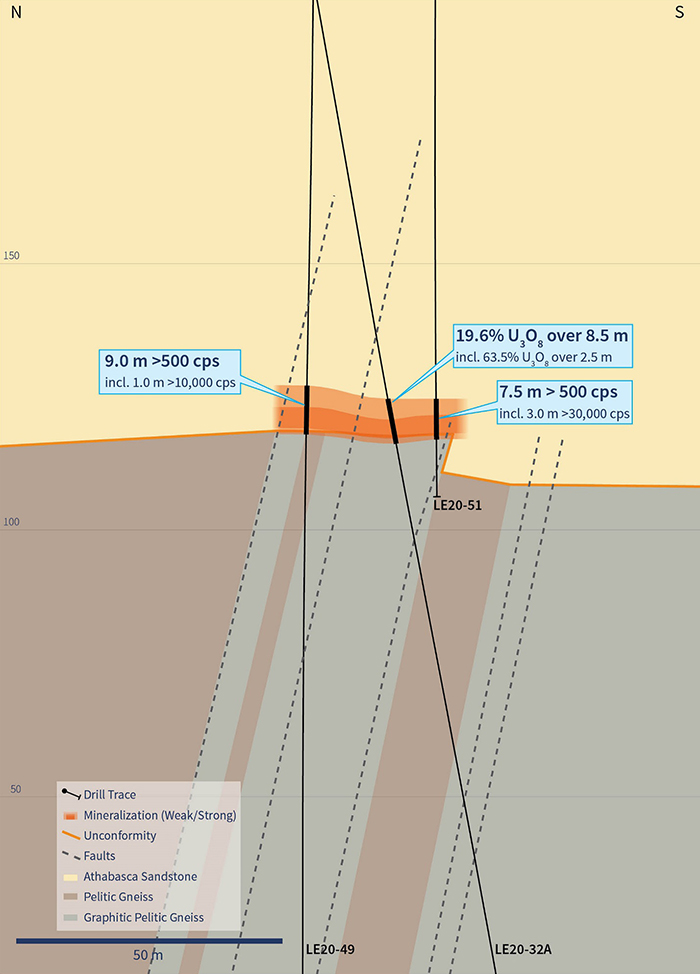 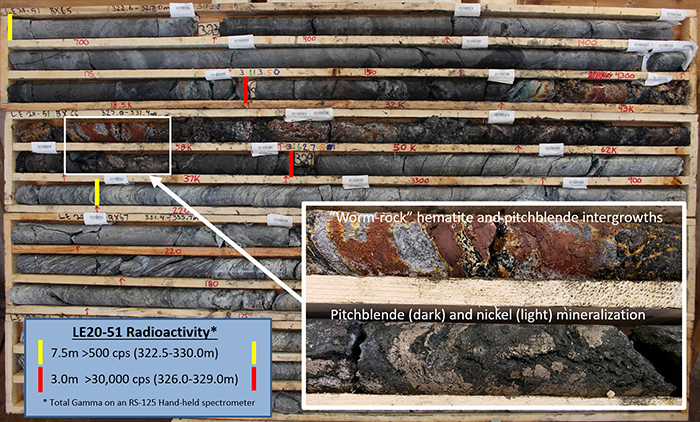 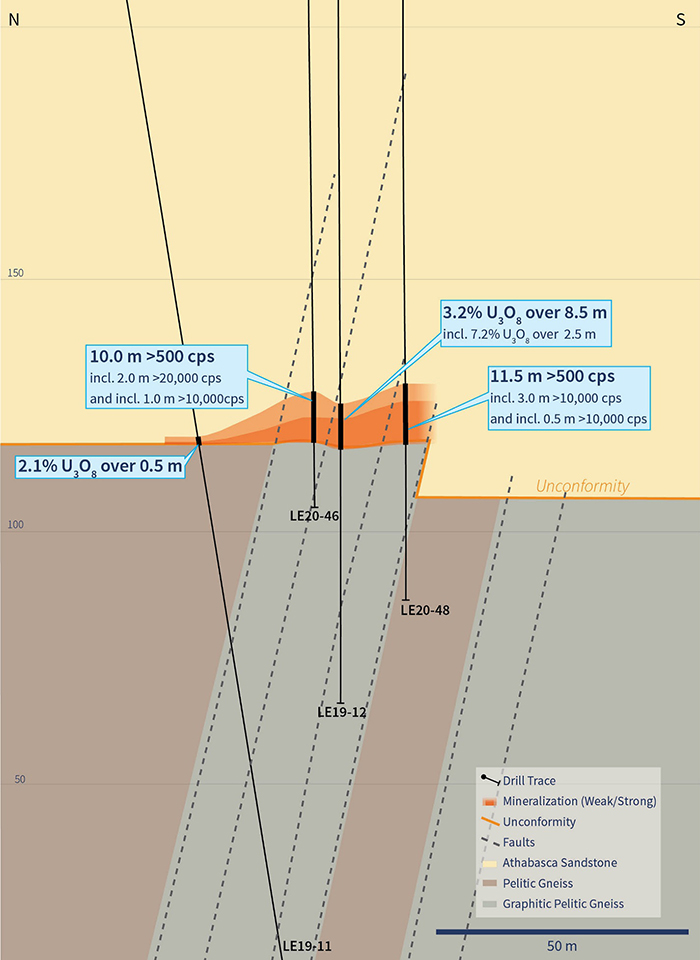 The scientific and technical information contained in this news release was prepared by Andy Carmichael, P.Geo., IsoEnergy’s Senior Geologist, who is a “Qualified Person” (as defined in NI 43-101 – Standards of Disclosure for Mineral Projects).  Mr. Carmichael has verified the data disclosed.  All radioactivity measurements reported herein are total gamma from an RS-125 hand-held spectrometer.  As mineralized drill holes at the Hurricane zone are oriented very steeply (-80 to -90 degrees) into a zone of mineralization that is interpreted to be horizontal, the true thickness of the intersections is expected to be greater than or equal to 90% of the core lengths.  This news release refers to properties other than those in which the Company has an interest.  Mineralization on those other properties is not necessarily indicative of mineralization on the Company’s properties.  All chemical analyses are completed for the Company by SRC Geoanalytical Laboratories in Saskatoon, SK.  For additional information regarding the Company’s Larocque East Project, including its quality assurance and quality control procedures, please see the Technical Report dated effective May 15, 2019 on the Company’s profile at www.sedar.com.